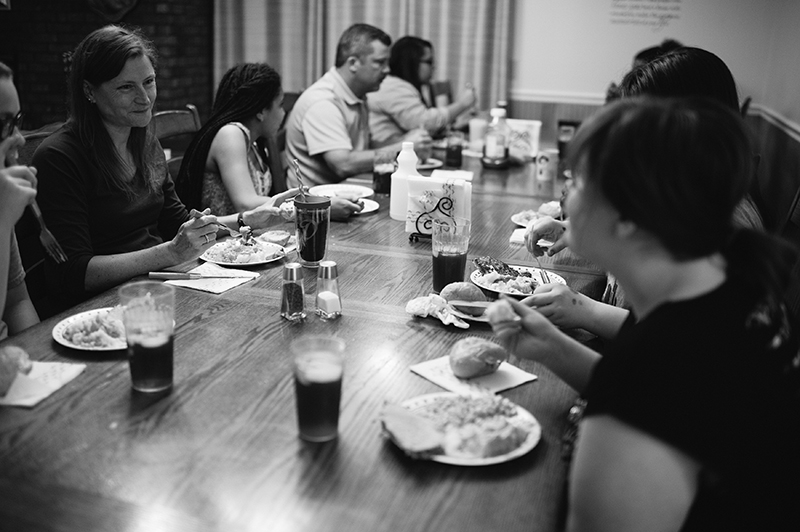 There is an old saying, “many hands make light work.” One simple idea proved the wisdom of this saying recently in a special way for the houseparents at the Brentwood campus.

As is the case in this ministry, sometimes there is more work to do than there are hands to do it, and so it was this past spring.

Short-staffed while waiting for a new couple to answer the call to serve, the duties and responsibilities of the houseparents became even more of a juggling act than usual. Between caring for the kids, maintaining the households and property, and the myriad of details that go into the day-to-day work of houseparenting, the “to-do” list and the hours in which “to-do” them seemed nearly unbalanced. And then an inspired idea occurred to someone on staff with a concern for the houseparents. An old-fashioned idea, but with a modern twist.

Historically, God’s people are known for bringing a meal in times of distress. In this age of technology, the internet can be as useful as a casserole dish. A free website called Meal Train (Mealtrain.com) was utilized by that concerned staffer who invited a small group of about eight individuals to sign up online to bring a meal to the cottages. Prepping dinner for a table full of kids, even for a seasoned houseparent, takes precious time and energy. Eight dinners equal at least eight hours. One of the very powerful aspects of social media (especially powerful in the hands of God’s people) is the ability to share simple ideas and connect with like-minded people quickly and exponentially. And that is exactly what happened. Those eight shared with others, and from the first meal delivered on March 23 (baked ziti and Caesar salad), to the end of June, a total of 74 people had signed up to participate!

The effort was made not just by people already familiar with TBCH. Office staff, folks from churches who support TBCH, and even a few new friends who didn’t know anything about TBCH pitched in. One young man signed up after seeing it posted at the company where he worked! And some stayed for dinner, too. Another participant from an hour’s drive away brought poppy seed chicken (fondly remembered by the kids). Page Durham stayed, talked, visited, and decided to come back again a few weeks later. “My husband and I both have been touched in such a sweet, sweet way. It wasn’t just a meal delivered, but yet the beginning of a new friendship.”

Brentwood houseparent Nathan Mankin explained one of the best things about the experience for him and his wife, Laura. “It freed us up together for a little more time to connect with the kids and spend time with them playing outside before dinner.” Another couple on staff, Brad and Vanessa Sams, remarked that it had both practical and spiritual benefits. “It helped with our budget since we didn’t have to spend so much in food, it helped with time since we didn’t have to spend hours in the kitchen…, it helped with testimony. Our boys were able to experience kindness and generosity through the meal train.”

This was a sure-fire and simple enough recipe: a need, an idea, a little social media, seasoned with the willing spirit of God’s people. The end of June saw the much-needed addition of a new houseparent couple in Brentwood. For a time, though, the staff was one set of hands short. But seventy-four sets of hands joined in to pick up some of the slack, becoming a tangible example of the “many hands that make light work.”

Psalm 127:3-5 Children are a heritage from the LORD, Offspring a reward from him. Like arrows in the hands of a warrior Are children born in one’s youth. Blessed is the man Whose quiver is full of them. They will not be put to shame When they contend with their opponents in court. The Lord…

The Ranch at Millington

After almost 3 years in foster care, Chase* was ready to be reunited with his mom and to be able to go home and live with her. At the beginning of those 3 years, both Chase and his mom had some major issues that made it unsafe for them to be together. Chase was diagnosed…

We had been praying for 6 years about becoming foster parents. We were positive that this was a direction God was leading us. Through our jobs in education we have worked with several foster children which only strengthened our desire to eventually become foster parents. I remember looking at training dates several times, but we just…

Tiffany became a Christ Follower last year. “When I first came to TBCH, I was not good. I was getting in trouble at school…and I feel like TBCH gave me the power to choose ‘good.’ They were the ones to show me that doing good is not weak. So they gave me the choice to…